WtP: Unit 4 — How have the protections of the Bill of Rights been developed and expanded? 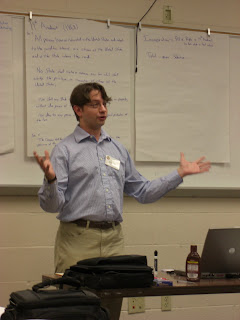 The notion of a living constitution is that the inherent structure is relatively stable and is accepted as the higher law of the land.

David began with a discussion of Justice Thurgood Marshall's "Commentary: Reflections on the Bicentennial of the United States Constitution." Next, we discussed Sanford Levinson's "Why I Did Not Sign the Constitution: With a Chance to Endorse It, I Had to Decline." He also addressed the issue, as did Leeson and Casper, of a lack of an explanation of the term "citizen" in the Constitution.

Many scholars would argue that understanding our Constitution requires moving beyond the formal Constitution (see below) toward a close and thorough review of court precedents, habits, understanding, and attitudes.

Key Elements of the Formal Constitution:
The Dred Scott Case (1857)

Dred Scott, his wife, and children were owned by a doctor and soldier. The family owning the Scotts took their family and slaves into a free territory. Scott asked why he shouldn't be free if living in a free territory.

The main question set before the Supreme Court was whether children of imported slaves could ever attain full citizenship. Taney answered that without an amendment to the U.S. Constitution, blacks could never become full U.S. citizens. This concept alone would probably not been enough to inflame the north into the Civil War. The decision further argued that it was not possible to abolish slavery in the territories because of Constitutional provisions relating to property. This was the first time in U.S. history that the Supreme Court struck down major legislation.

The fear of the Northerners was that another Dred Scott was on its way that would result in creating slave states from non-slave states. They were worried there was an effort to nationalize slavery.

It took the Civil War for Americans to accept that they were able to have a living, evolving Constitution.

The Civil Rights Act (1866) states that blacks and whites have the same rights.

The goal of the Amendment was to overturn the Dred Scott decision as well as overturn other court cases that did not recognize blacks as equal citizens. The first Section establishes natural-born citizenship for both the United States and your resident state (dual citizenship). Though it guarantees "privileges and immunities," it does not specify these privileges and immunities.

This amendment established natural-born citizenship to both the nation and resident states (dual citizenship) in addition to due process of law (The "Due Process Clause"). It also adds an "Equal Protection Clause."
Civil Rights Act (1875): Public accommodations cannot discriminate against people because of race.

Civil Rights Cases (1883): The Supreme Court questions whether it was acceptable for Congress to pass acts related to state discrimination. Though it ensures no discrimination within states, the decision does not extend to individuals.

Harlan was a slave owner who changed his mind about slave ownership and later became a Justice of the Supreme Court. He wrote a dissenting opinion that the 13th and 14th Amendments did change the fundamental law and reiterated that it was Congress, not the Courts, had the power to write legislation.

Plessy vs. Ferguson (1896) supports the Jim Crow laws that were established between 1883 and 1896). Note that these laws were started in the north. The South, because slavery was still in force, did not need these laws - they were already discriminating against the blacks. Some of the elements included in the Jim Crow laws that limited people from voting (poll tax, literacy, "reasonable interpretations" of the Constitution, and tests about the government). There were recommendations to have separate everything from rail cars to different bibles on which to testify in court. In the Plessy decision, Brown stated you cannot legislate morality. The decision ended by stating that if the state laws were "reasonable," they could pass any laws they would like. Justic Harlan wrote a dissenting opinion in which he said this decision would be as disastrous as the Dred Scott decision.

Incorporation is the concept that the 14th Amendment extends all Amendments in the Bill of Rights to individual citizens (instead of the rights being limited to only the states). Based on court cases, not all rights have yet been incorporated so they relate to individual rights. The 2nd (bear arms) and 3rd (quartering soldiers) have not yet been incorporated under the 14th Amendment.
Posted by Christy G. Keeler, Ph.D. at 8:52 AM