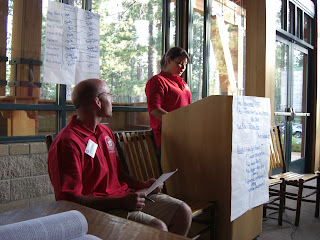 Separate students into two large groups, calling one the Federalists and the other the Anti-Federalists. Within each group, assign one student a concept from the U.S. Constitution (e.g., republicanism, federalism, senate). Allow all students 20 minutes of individual work to develop a 60 second position statement and 20 second rebuttal for the position.

Invite all students back to the classroom and separate them into their groups, seating them in order of the words to be debated.

After the debate, have "judges" determine which team won by evaluating each pair of debaters.
Posted by Christy G. Keeler, Ph.D. at 8:51 AM

omg this is a really goooood idea...i just sent my teacher this to see if we can do an assignment like this is awesomme!! thanks for the tips ill tell other teachers and my friends to comment too.

Samantha,
Thank you for your comment. I enjoyed the activity and know it has been successful in many schools around the nation. Are any of the teachers at your school using the We the People curriculum? If not, I would be happy to connect them with people who could help them receive training in the program.
Your teachers are welcome to contact me directly if they would like more information: christy@keelers.com