WtP: Unit 2 — How Did the Framers Create the Constitution?

Scott was introduced as a master teacher and quickly convinced us this was true by greeting us with smiles and memorizing all of our names.

The reason for the Convention was to suggest amendments to the Articles of Confederation because they didn't believe the Articles were working effectively. Many of the individuals as this Convention also were officers within the Continental Congress.

Representatives: Individuals that exist to serve a population and are part of a body and engage in persuasive dialog.

At the time of the Convention, there were several systems of representation the Framers knew including the British government, colonial governments, and Articles of Confederation government.

The British government was led by the king who represented himself and his family, the House of Lords represented the nobility (and tied to a specific population), and the House of Commons represented everyone else. Districts were divided by geographic area within Great Britain, not by human demographics.

An argument of the Framers was taxation without representation. Britain argued that the House of Commons represented all the common people, regardless of whether they live in Great Britain. The colonies borrowed much of the British system of government.

The government of the colonies was represented by a governor appointed by the king and representatives of the constituents to their assemblies. The states write new constitutions that include very strong legislative bodies and very weak governors.

Under the Articles of Confederation, the government had very specific enumerated powers that together formed a "firm league of friendship." Thirteen states sent representatives to the "United States in Congress Assembled." They were simply a league, a meeting of the states. Each state had one vote, not represented by population or geographic size. To change the Articles of Confederation, all thirteen states had to agree to all amendments. There was never a time when all thirteen states could agree. This led to significant disappointment by the people because they could not effectively change the Articles. The leaders were very aware of the weaknesses of the Articles and many left Congress when their terms expired because of their disappointment in the system. Issues including currency were very problematic.

The Framers chose to have the Constitutional Convention in private and began by setting rules. Some of these included the use of civic discourse (all individuals were given opportunities to hear out one another until presented ideas were understood by all), no one could speak twice before everyone had the opportunity to speak once, all issues could be revisited.

Proposals at the Constitutional Convention

Over the first month of the Convention, the main topics were representation and the branches of power. These were addressed in three proposed plans.

Dr. Casper separated us into three groups and gave each group a separate plan. Without telling us, one group received the Virgina Plan (Madison's Plan), one group (mine) received the New Jersey Plan, and a third group received Hamilton's Plan. We were asked to read the plans in our groups and draw a picture representing the plan. All groups chose to draw forms of concept maps, and then each group presented their plan. Scott then informed us of the history related to the plans and reviewed the level of central power existing within each of the plans. 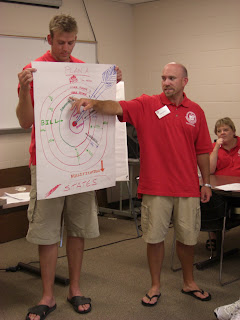 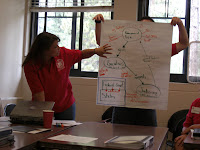 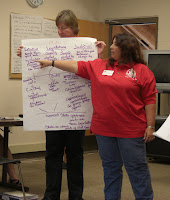 Madison was concerned that the Virginia Plan was not favorable during the Convention. One problem was that both houses of the legislative branch were elected by the people and divided based on population. The Great Compromise was to have two houses of the legislature with one having a varied number of representatives based on state populations and the other having the same number of representatives for each state. This compromise was considered a failure to Madison because it gave the states (rather than the people) more power than under the Virginia Plan. The next question was about deciding how to determine the voting population of a state (e.g., property owners, slaves, women).

The Constitution addresses the issue of slavery, without using the word "slavery" in four areas.

The issue of slavery was not resolved in the Constitution, nor was the issue of citizenship and voting rights. They did not deal with these issues because they knew they would not be able to come to consensus.

The power of the presidency was also a concern because its powers were never enumerated. They did this, in part, because they knew they would elect Washington and they would allow him to create the office through his experience, and, in part, this occurred because the issue was discussed at the end of the Convention when they were tired. They spent more time determining how to elect the president than what the president would do. They chose not to use direct election because the states could decide who would vote and they could allow all their children and women vote if they wanted to win an election. Using a method that would allow the legislators to choose the president would leave the executive in a position in which he was beholden to the legislators. The electoral college was a compromise because it included representatives based on population as well as statehood. Another benefit, for some members of the Convention, was that the electoral college would allow a group of wise, educated individuals to choose the president.

The End of the Convention

Several of the delegates have left the Convention before it concludes for a myriad of reasons, primarily because of a lack of support of the document. The Constitution was required to have support of nine of the thirteen states. To get it considered for ratification, it was published in newspapers and, immediately, the press begn publishing letters stating opinions about the document. Had the vote been taken when originally reduced, the U.S. Constitution probably would not have passed. It was critical that New York and Virginia ratified the document. Some states ratify the Constitution quickly because they are small states or because they would gain economic benefits because the center of government would be in their state (Pennsylvania).

The Federalists were truly nationalists, but they chose the term because it gave the impression that they were more in alignment with federal views. The writers of the federalist and anti-federalist papers used pseudonyms because they could have their ideas received as ideas, rather than having them associated with their individual personalities. The names they used were mostly classical and Roman, like Brutus.

Scott then worked us through the process of reading primary documents very closely. The people of 1787 were very literate including 90% of white males and they are written very technically. Argument, language, and context are critical in documents and this is what a carefully reading addresses. He recommends we ask "What language is the author using and why?" He then carefully walked us through the Anti-Federalist argument by Brutus on October 18, 1787.