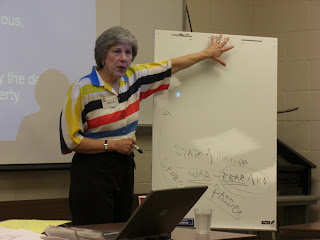 To access primary resources relating to the We the People, go to the Utah site on the Center for Civic Education website (here).

A benefit of Unit 1 is that it is about the individual and it answers the "Why" questions about hat we do. The focus of the unit is on ideas, values, principles, and history. It asks how we should live together.

Sue mentioned the school activity of giving students the opportunity to play a game, but not giving them any direction or rules. Students will always begin by jointly conceiving and agreeing to agreeing to a set of rules. This is precisely what happened at the Philadelphia Convention.

Plato and Aristotle are examples of cassical republicanism. It is the ancient understandings of the public sphere, political liberty, communal well-being, and human happiness.

What is human nature?

This addresses the question of what distinguishes human beings from other animals. We are social ("polis"), interdependent animals. The philosophy of Ubuntu argues that we become human by being in a social community. Humans are unique because they have the capacity to reason and speak. The capacity to speak and reason, developed within and through our environment, determines who is worthy to be a citizen versus who becomes a slave. Humans seek human communities (e.g., family, gangs, technology-based semiotic domains).

Classical republicans want interaction between people because this develops the individual ability to speak and reason. They want all people to be happy and believe this can occur if they thrive by meeting their ultimate end or purpose (called "telos"), or self-actualization. Humans are consistently making value judgments about what we do in our daily lives. Classical republicans are always seeking to increase our capacity.

Why do humans need government and who should govern?

Classical republicans believe living together can lead to excellence, but requires virtue. We have a capacity to be great or evil, but must make choices to develop that capacity. As we approach our positive capacity to speak and reason, which only occurs through community, we become happy and the community works well.

Classical republicans seek a self-sustaining society, like a kibbutz or moshav. Plato said a community should not exceed 5,040 people because that keeps us within three degrees of separation. With computing, it is believed that the six degrees of separation will reduce to five.

Education is the central responsibility within the polis. Public spiritedness is critical as is living naturally together.

What is government's ("the public's") role in achieving what is good for humans?

Elements of the government's role in classical republicanism include:
Assuring wise leadership requires finding a person who doesn't care about power. This is Plato's philosopher king," an individual that does not really want to govern, but is drawn into it. It is someone who is more interested in their reputation than power, prestige, and money. Classical republicanism seeks an individual who is not self-interested. In addition, the classical republican is seeking a leader who is interested in helping all community members to attain their best capacity and a person who shares common beliefs.

What is human nature?

Human nature can be determined by looking to a pre-political "state of nature."

Hobbes questions what life would be like in an environment without leadership. He argues that this would be a state of war. The question is: "How would I really behave if I didn't have a fear of being caught?" In this lawless society, there is a fear of all experiencing a violent death. It is a war f every man against every man. Everyone is a threat to everyone else. One common factor between all humans is that we are all mortal. Without government to keep us from killing each other, we would fear violent death more than anything else. In a state of nature, it is a constant war to survive and we are governed by a passion of fear. To survive, we must throw off the state of nature.

Hobbes argues that to leave a state of nature, we give our rights up in return for protection from a leviathan, a mortal god. We must give up absolute power. In order for the people to obey the laws, it is critical to have a strong police state. There must be a fear of violent death under government that is greater than fear of violent death in a state of nature. So, don't criticize a government for being too powerful, describe it as not being powerful enough.

Hobbes was explaining Machiavelli's political beliefs, 100 years after he wrote The Prince.

Along comes John Locke. We leave the state of nature by giving up some rights, and agree to be social via a social contract

What is the government's ("the public's") role in achieving what is good for human beings?

Government is needed to provide defense and assure "domestic tranquility."
Government cannot be trusted completely.
Governments closest to people should have the greatest responsibilities.

What should be the proper relationship between public and private?

Ask students how they balance public and private interests by using the following examples: These challenge Tocqueville's "self-interest rightly understood" ideas."Tocqueville provides a broader description of public interest than just looking at the self.

Classical republicans tend to judge from a public perspective with ideals including desirability of small communities, focus on the common good, emphasis on education and moral virtue, duties to community, and public spiritedness.

Natural rights theorists tend to judge from the private perspective with government by consent, limited government, "self-interest rightly understood," and government as means for satisfying self-interest.

Examples from both the natural rights theory and classical republicanism blended in the following important American documents:
The Declaration of Independence is very classical republican in its presentation by stating we have a duty to our nation.

"When in the Course of human events, it becomes necessary for one people to dissolve the political bands which have connected them with another, and to assume among the powers of the earth, the separate and equal station to which the Laws of Nature and of Nature's God entitle them, a decent respect to the opinions of mankind requires that they should declare the causes which impel them to the separation.We hold these truths to be self-evident, that all men are created equal, that they are endowed by their Creator with certain unalienable Rights, that among these are Life, Liberty and the pursuit of Happiness. That to secure these rights, Governments are instituted among Men, deriving their just powers from the consent of the governed, That whenever any Form of Government becomes destructive of these ends, it is the Right of the People to alter or to abolish it, and to institute new Government, laying its foundation on such principles and organizing its powers in such form, as to them shall seem most likely to effect their Safety and Happiness. Prudence, indeed, will dictate that Governments long established should not be changed for light and transient causes; and accordingly all experience hath shewn, that mankind are more disposed to suffer, while evils are sufferable, than to right themselves by abolishing the forms to which they are accustomed. But when a long train of abuses and usurpations, pursuing invariably the same Object evinces a design to reduce them under absolute Despotism, it is their right, it is their duty, to throw off such Government, and to provide new Guards for their future security."

The Declaration is a social contract where the people of the colonies have agreed to work together, not to limit themselves to behaving as individuals within a state of nature. The people recognized their responsibilities, not just to the government, but to the attainment of all their people to achieve happiness. Within classical republicanism, we have a right and duty to throw off destructive governments.

The Declaration recognized that each of the colonies was like its own classical republic. It is within the states that there was political morality.
Posted by Christy G. Keeler, Ph.D. at 8:59 AM