The full middle level curriculum can be delivered in six weeks if following the book directly. Angela recommends using the book in order and using the entire curriculum. It is possible to use sections of the text, substituting them for units currently being taught. Regardless of the amount of the text the teacher chooses to use, it is imperative the students engage in the congressional hearing. The skills they gain through this process is critical to developing 21st Century Skills.

Using units 1, 2, 5, and 6 are probably the best chapters to use if you cannot use the entire curriculum. Students can read in class or out of class (if there are enough books). When reading in class, encourage "Think Alouds."

One teacher has her students study Unit 1 (chapters 2, 3, 4, and 5) at the beginning of the school year, spending one day per lesson. When finished, the class spends a day to develop their class rules.

Unit 2 (Articles of Confederation, Shay's Rebellion, Need for a Constitution)

The WtP text focuses more on the basics and understandable concepts than other 7th grade U.S. history texts. This is a nice unit to substitute for what is addressed in other textbooks. Some teachers use this unit as a precursor to the Civil War. The unit helps students gain a strong understanding of the Constitution.

Students love this unit because there is lots of debate about what they believe. It is particularly good at the end of the year when students are losing interest and need controversy to revive them.

This is a nice unit to bring in current issues and events. A great way to end the school year is talking about citizenship and their personal responsibilities.

Students clear their desks of everything but a writing utensil. Hand out a balloon to each child and have them blow them up. Rule 1: No one can get hurt. Rule 2: Love your balloon. Rule 3: Relish it. Rule 4: You must have to have an unpopped balloon at the end of the game. Instruct them the game lasts for 90 seconds and yell "Go"! The students will try top pop everyone's balloons. After 90 seconds, ask "Why didn't you all just sit quietly in your desks so you could all win?" Ask "Why did some people work together to to pop the balloons of others?" Ask: "Why were some people more powerful/better at protecting their balloons?" Ask: "Was this a fair game? Why r why not?" Ask: "If you could have made a more fair game, what what would you have done differently?" These questions should lead to an understanding of the state of nature. After describing the state of nature, have students work in groiups to answer the questions at the end of chapter 2.

Use kinesthetic moves to teach the vocabulary. Angela Orr developed example movements for the terms below, but videos of these movements, unfortunately, were lost during a server error.

After introducing some kinesthetic moves, give them vocabulary words throughout the year and let them create their own moves.

Play Splat: Tape words around the floor, and separate students into teams of two. Give each team a flyswatter. Read a definition and the first team to swat the correct word gets a point.

Have students look at and analyze pictures and cartoons. Using the graphics, allow students to construct their own understanding of vocabulary terms or concepts (e.g., limited powers, suffrage challenges, 14th Amendment).

This is a lesson from p. 234 of the middle school textbook about due process. The lesson addresses the following Constitutional Amendments:
The teacher reads a manuscript of Gerald Gualt. We were to yell "Stop" whenever we felt that the rights of Gualt was violated. At that point, we would identify the right that had been offended and which amendment secured that right or what might violate other laws or procedures of due process. We would write these answers on an "In Re Gualt" worksheet.

Angela introduced a worksheet that encourages student discussion. The students review statements and must decide if the statement is protected under the First Amendment or not. Example statements include:
Accountable Talk

Angela introduces her students to "Accountable Talk." She gives all each student in the group a number of poker chips. Sometimes, the chips are different colors. For example, each student may receive two red chips and two blue chips. The red chips allow students to make any related statement (e.g., "I feel...") The blue chips might represent comments related to the text or that include a citation to a law, precedent etc.
This can be done in a whole group session, separating the students into two large groups, or even using it with small groups of 3-4 students.

Below is a graphic of a handout Angela created to help others better understand using accountable talk in classrooms. 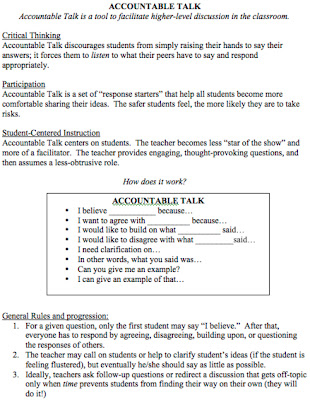 How Does It Relate? Vocabulary

List vocabulary words from the the current chapter of the curriculum in rows of a grid and concepts addressed in multiple chapters from the text. Students work in groups to see how the vocabulary words they are currently learning relate to concepts from other chapters with which they're familiar.
Posted by Christy G. Keeler, Ph.D. at 1:03 PM